RCSI to re-engage with DoH on physician associate role

Advocates for physician associates say their value has again been underlined during the Covid-19 crisis. Catherine Reilly reports

RCSI will be re-engaging with the Department of Health to seek formal recognition of the physician associate (PA) role, the Medical Director of the College’s Physician Associate MSc Programme has told the Medical Independent (MI).

Prof James Paul O’Neill, Professor of Otolaryngology, Head and Neck Surgery at Beaumont Hospital, Dublin, and RCSI, said the flexibility and impact of PAs have been underlined during the Covid-19 crisis.

PAs support physicians and surgeons in the diagnosis and management of patients and are trained to perform several roles, including taking medical histories, performing examinations, making diagnoses and analysing test results.

A recent RCSI webinar on ‘The role of the physician associate during the Covid-19 pandemic in Beaumont Hospital’ featured Consultant in Infectious Diseases (ID) Dr Eoghan De Barra, who described how PAs were redeployed from surgical directorates into the ID team after he approached hospital management for badly-needed resources.

The PAs were integral in setting-up and running a Covid-19 drive-through testing pod at Beaumont, which facilitated community and healthcare worker swabbing. Dr De Barra returned to hospital management requesting more PAs and “four more PAs were hired in short order to contribute to the running of the Covid response”.

PAs also ran a Covid-19 patient flow management system at the hospital and monitored the symptoms of staff out sick with the virus through an app, among other duties.

There are now 10 PAs at Beaumont and a hospital spokesperson said their engagement “has been a very successful initiative”.

Prof O’Neill told MI: “We have full admiration for what they did, in terms of immediately being able to adapt, to take on a new role, and for something that was so important. And that saved hundreds if not thousands of lives, certainly in Beaumont Hospital, and they were central to that, so I want them to be recognised for the great work they are doing.” He felt PAs had been well received by other healthcare staff at Beaumont.

The surgeon first worked with PAs in the US — as a junior ENT resident at Boston Children’s Hospital, and later as fellow and chief fellow in head and neck cancer surgery at Memorial Sloan Kettering Cancer Centre in New York.

They have a particular value in ensuring continuity of care within medical teams, according to Prof O’Neill.

“You have someone who is a constant on the team, they know the patients, they also know the way things are done, and certainly for me in 2007 in Boston, that was a huge benefit where someone was able to basically take me under their wing and say ‘this is the way we do it here’.

“I have a PA working in my department now [in Beaumont] and she has had a huge impact for us, as I knew she would, working in multiple areas. It is a very varied job. What we say in terms of ‘what is a physician associate’ is, they are professionally trained and provide services within their defined scope of practice. They have a science [related] degree and do two years of a Masters [in PA studies]… they come to your team and they can mould into whatever aspect of medical care you want them to be involved with.” 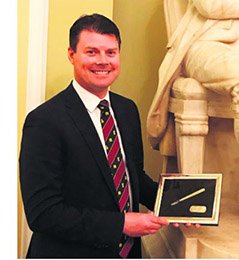 Prof O’Neill referred to a number of “negative forces” that have impacted on doctor retention, including stress levels, lack of work-life balance, lack of protected training time, and performance of non-core tasks. He maintained that PAs can help alleviate pressures on consultants and NCHDs.

From July 2015 to October 2017, RCSI led a pilot project at Beaumont involving four PAs who had trained in North America, where the role is long established.

“In terms of the colorectal service, they had a virtual outpatient clinic and 300 patients were seen by the PA during that pilot project,” according to Prof O’Neill. “… The waiting times for varicose veins decreased from 18 months to three months, and [there was] increasing patient access in the breast clinic, the PA was actually able to see twice as many patients as the NCHDs, so they were able to see returned patients, while the NCHDs were able to see new patients with their consultant, which was good for them in terms of their training. It is a win-win.”

Since 2016, some 53 students have graduated, or are currently enrolled, in the RCSI’s two-year postgraduate course, with 15-to-20 more students expected in January.

There are 25 RCSI-trained PAs working in Ireland across primary and secondary care.

The Irish Society of Physician Associates provides professional support to PAs working in Ireland and manages a voluntary registry.

However, there is currently no statutory regulation of the role, while the Department has yet to officially designate it as a grade within the health service.

Prof O’Neill said the next step for the RCSI is to re-engage with the Department and HSE and this would hopefully lead to a decision on which body would regulate PAs.

He said advocating for prescription rights was not “immediately on our radar”. Nevertheless, he said one of the hardest components of the training at RCSI was pharmacology, “so they have an excellent grounding”.

Prof O’Neill concluded: “I think there was some concern that this was overlapping or competing with other roles, the specialist nursing roles, etc, and it is not. By my supporting PAs, it is not that we are not supporting those other essential roles in healthcare; it is just having worked with PAs, I really found it had a genuine benefit for a team, the training, the patients.”